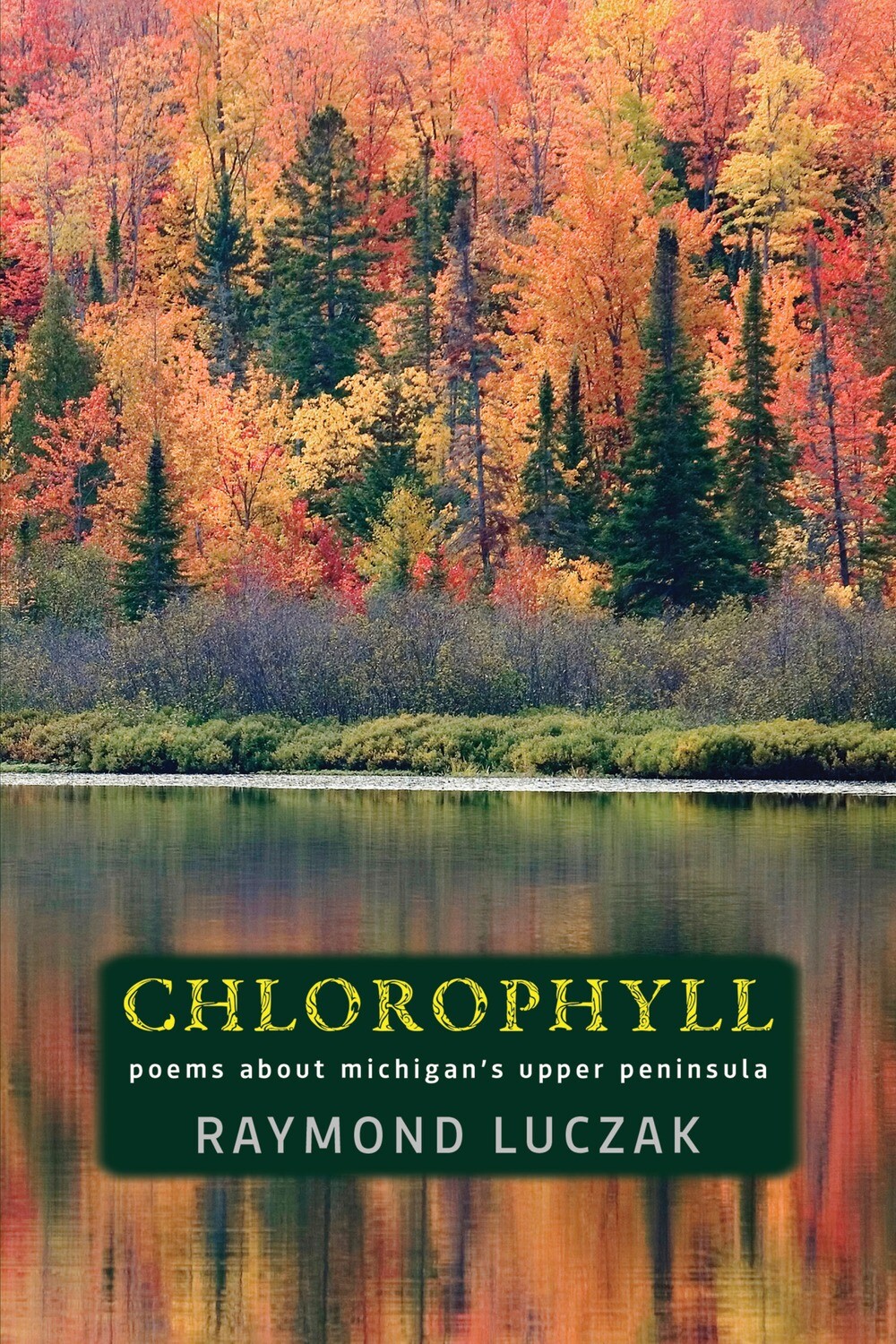 ‎ 978-1-61599-642-1
$15.95
Poems about Michigan's Upper Peninsula
In stock
1
Product Details
UPC: ‎ 978-1-61599-642-1
Brand: Modern History Press
Binding: Paperback
Audiobook: Audible, iTunes
Edition: 1st
Author: Raymond Luczak
Pages: 98
Publication Date: 09/01/2022
Join me on a journey to the unspoiled forests of Upper Michigan
A long time ago young men wishing to be tall
scaled the mast of my octopus arms
and scanned the horizon of Lake Superior
for a glimmer of Canada. Usually we were cut down ...

For many of those who've lived there, the Upper Peninsula of Michigan can seem like a magical place because nature there feels so potent and, at times, full of mystery. After having grown up there, Raymond Luczak can certainly attest to its mythical powers. In Chlorophyll, he reimagines Lake Superior and its environs as well as his houseplants as a variety of imaginary and historical characters.

Ghosts dress in only gray and white.
This is how they camouflage their volcanic selves.
Lake Superior is bottled with them.
You can't see them but they move like fish ...

"In Raymond Luczak's Chlorophyll, the devastating natural beauty of Michigan's Upper Peninsula is imbued with passions its reticent human inhabitants are loathe to express. Trees, lakes, and stones air their infatuations, their grudges, their mythologies and griefs. Through this forest of the otherwise unsaid, we catch glimpses of a speaker who knows there is no line to blur between 'person' and 'nature.'" --Emily Van Kley, author of Arrhythmia and The Rust and the Cold

Spring is a girl who's cried all night
only to find that morning easily forgives
the coldness of him having left her
stranded among the thicket of evergreens ...

"Giving voice to the natural world, Raymond Luczak allows the rocks, trees, lakes, insects, and flowers that are part of flora and fauna of the region to speak for themselves, and they remind us that we are human, living in a more than human world." --William Reichard, author of Our Delicate Barricades Downed and The Night Horse: New and Selected Poems

"Evocative yet personal communing with nature. One of my sons summed up poetry as saying a lot with a few words. This collection does that. There is a piece of prose smuggled in and the poems vary in length considerably. There are some poems with traditional rhyme (and assonance) and the main themes are nature, anthropomorphised and used as metaphor. Dependability of nature and changing seasons also feature. The author reveals much of his story and relationships as well as the geography he inhabits and appreciates. I would advise reading this in small sips, as I did. That way you'll be able to savor the poems and their messages. I have deducted a star as many have already been published previously - and for the inclusion of prose (albeit informative) amongst the poems." --Daryl P. Goodwin, M.D.

"Being born a Michigan girl and now living in Texas; I miss the seasons, the tall beautiful trees, the clear rushing water of the rivers, the many lakes, and of course the Great Lakes surrounding Michigan. This collection of poems paints the visuals into a picturesque moving picture of the landscape, Lake Superior, insects, trees, animals, flowers, grass, life and death, etc. You don't have to be a Michigander or an outdoorsman to appreciate nature's beauty coming to life in the spring, the lazy dog days of summer, the colorful and chillier days of autumn, and the frigid cold and stark white of winter. This collection provides escapism to ordinary day!" --Laura Spinnett

"Luczak has a fantastic command of language and human emotion. Get a box of Kleenex, a bottle of wine, and some uninterrupted reading time. I have already reread it, told people about the book, and am expecting this book will win many awards. Very impressive." --Carolyn Wilhelm, Midwest Book Review

Raymond Luczak grew up in the Upper Peninsula. He is the author and editor of numerous titles such as Compassion, Michigan: The Ironwood Stories. His book once upon a twin: poems was chosen as a U.P. Notable Book for 2021. He resides in Minneapolis, Minnesota
Save this product for later
Display prices in: USD