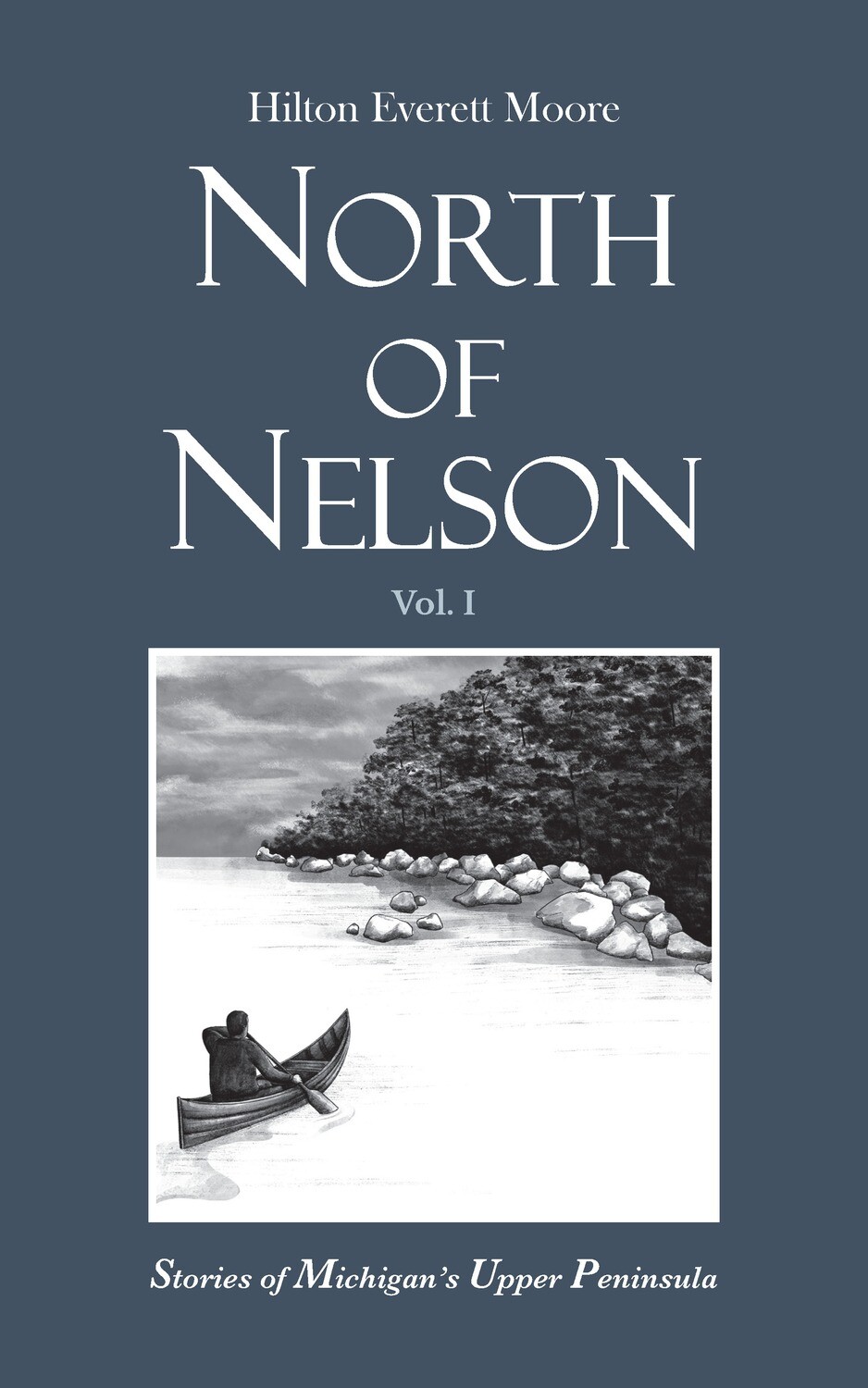 978-1-7367449-0-1
$14.95
Stories of Michigan's Upper Peninsula - Volume 1
In stock
1
Product Details
UPC: 978-1-7367449-0-1
Brand: Silver Mountain Press
Binding: Paperback
Audiobook: iTunes, Audible.com
Edition: 1st
Author: Hilton Everett Moore
Pages: 144
Publication Date: 09/01/2022
North of Nelson presents six gripping short stories set in the wilderness of the Upper Peninsula of Michigan will hold the reader spellbound as the various protagonists live, and sometimes perish, in this often harsh and rugged land. The mythical village of Nelson frames the life and plights of the various actors as they plunge headlong physically, psychologically, and metaphorically, into the treacherous waters of the Sturgeon River Country, where humans live precariously on the edge of a knife, and every mistake could be fatal.

While this work is entirely fiction--it easily spans over a century-- the tales dig at, and lay bare, a slice of Americana, a neglected culture, which is rapidly atrophying in rural areas--not only across the Upper Peninsula, but in much of the rural north.

In the opening story, "The Irascible Pedagogue," set in the later part of the nineteenth century, the lonely and maddened heart of the village pedagogue, Horace Nelson, ends regrettably as jealously invades his troubled mind causing unpredictable mayhem and murder. In the second and award-winning short story, The Silent Mistress, Lizzie must endure, not only the poverty and destitution of the Great Depression, but also the inexorable decline of her husband's life as he wastes away from the ravages of alcoholism. Other memorable stories in North of Nelson, Volume 1, will not only entertain, but challenge the reader to examine the guts and sinew of a rare and vanishing culture--the great Upper Peninsula. North of Nelson: Volume 2 is scheduled to be published in late 2022.

"Moore's stories are reminiscent of Wendell Berry and Ron Rash where geography plays an important role not only in linking the stories but also serving as another character. While the location is distinctly the Upper Peninsula of Michigan, it transcends to other locations such as southern Ohio, eastern Kentucky, Appalachia, the Ozarks, or many other tight-knit rural areas where family is paramount. The central theme of relationships draws the characters not only to each other but to the place they call home. Moore reveals the same affinity to the Upper Peninsula that he allows his characters to feel." --Robert Boldrey, M.A. in English, Professor, North Central Michigan College

"These six stories reminds me of the early Joyce in Dubliners. Each is a careful analysis of deep and painful emotion generated by crime or illness or simply the remote ruggedness of Upper Michigan. I think a genuine U.P. literature needs this sort of work and am glad to see it." --Dr. Donald M. Hassler, Professor of English, Emeritus, Kent State University, Former Executive, Extrapolation Advisor, International Authors Publisher

"Moore's stories begin as a tightly woven fabric only to be unwoven as his characters come to life. Each of his stories entwines with another. He has an uncanny insight into the human condition and shows how each of us is a part of another. Moore shows how our actions are not truly actions of ourselves but rather a part of a chain reaction of love and hate, life and death in our universe." --Cynthia Dunn

"North of Nelson: Stories of Michigan's Upper Peninsula -- Vol 1. is filled with touching moments about real-life situations and how the characters in these six short stories struggled to overcome their life challenges. I highly recommend this book if you want to learn more about life during the Great Depression, about life at the Baraga orphanage (fictional location) and other experiences from the past concerning the characters from Moore's book about the U.P." -- Sharon Brunner, U.P. Book Review